Today was a whirlwind! I went vegan for the entire day – mostly by accident, but I changed my tune at the end of the day. It was exhausting! Have you ever tried being vegan for an extended period of time? My brother has been a vegan for 10 years – I think I rebelled again veganism because of that, but I’m open to try again…. maybe…. eventually….

I woke up to some beautiful “June” Gloom in July, and finally got to start the day with a big mug (or two) of coffee! 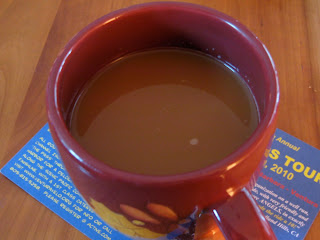 It’s been very difficult for me to be at the LBM house where they have no coffee maker! I don’t know how they survive!
I used up the last of the spinach this morning, and discovered that we were out of berries, so after digging through the freezer, my roommate came up with a bag of frozen mango. Don’t ask me how long it’s been there… I don’t even want to think about it. 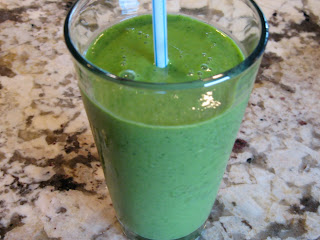 2 cups of spinach, 3/4 a cup of unsweetened soymilk, 1/4 a cup of frozen mango, 1/2 a frozen banana and the juice of 1 lemon.
I jumped in my car and got on the highway to head into LA for class. I was running a little late and didn’t have time to stop and get food stuffs, so I grabbed a banana and a kiwi from the fruit bowl before I left the house. Since I ate the banana on the freeway on the drive out, I figured taking a picture would probably be frowned upon by police/other drivers/many people who read the blog.
Class today was “small, medium and large” day. We got our scenes, ran lines outside for an hour, then came back and got our running order. Basically, the scenes are shown in order from the “smallest”, meaning the most conversational, to the “largest”, which means the most dramatic/comedic ones, that usually include lots of sight gags and screaming. Mine was a medium scene which was mostly just a conversation except for the one line I got to get pissed off and storm out the door. Wheeee!
My audition afterwards went amazingly! I got to the casting studio early because I’ve been called in to this place many times before, and if you don’t show up early, you end up with a line of 5 people in front of you, which can take up to 45 minutes to get through. After a short wait, they brought me in and I had 2 scenes with the new (and very cute) casting assistant/reader. It always helps to have someone cute to read with when you need to have chemistry in a scene ;-). I got to have a southern accent, flirt, and argue. The CD gave me an adjustment, we ran the first scene again, then did profiles on camera. I spent a few minutes afterwards chatting and reconnecting with the CD, then headed out. Happy, happy times! I don’t think it could’ve gone any better, and for now, that’s good enough for me :).
When I finally got to the talent manager’s office (about an hour later than I was supposed to because of my audish), I sat down and was treated to an apple/strawberry juice by the sweet older lady who shares another area of the office building. 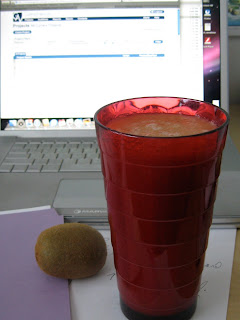 Lots of delicious fiber and hard work going on here! 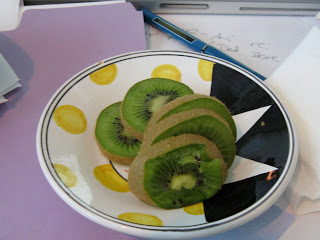 I sliced up my kiwi and inhaled it. I used to eat kiwis by cutting them in half and scooping out the insides with a spoon, but I discovered a few weeks ago that the skins are edible, and now I’m hooked!
Work was really busy! Episodics are finally casting again! The past few weeks have been pretty slow with a few pilots and a few features, but now that the regular shows are back from hiatus, I’m working non-stop with no breaks until I leave at 7pm. It’s hard work, but I really do like it!
I swung by Trader Joe’s on the way home and picked up a bag of spinach and frozen berries for my monster tomorrow, as well as a bag of lettuce to make a vegan KSS for dinner, and a new beer. 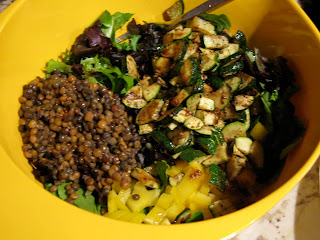 This had 3/4 a bag of chopped baby lettuce, 1/2 a cup of warmed lentils, 1/4 a cup of chopped bell pepper, 2 small zucchinis that were sauteed in olive oil and herbes de provence until soft and caramelized, and a teaspoon of homemade dressing.
The shocker comes here – I didn’t drink the beer! I just wasn’t feeling it today – are you concerned? Instead I had a tall glass of water, collapsed on the couch and watched an episode of That 70’s Show. Tomorrey will be a day full of hiking, filming auditions, and then working a late shift. I’m looking forward to being back on the trails! It’s been far too long.
How’s the weather in your area? Are you jealous of the Cali chill?

2 Responses to A Vegan Day!