My Pet Hanger, Stan, and How I Lost My Brain!

Today was ridiculous. Not ridiculous in a, “duuuuude, this wave is totally ridiculously rad!”, but more in a “why is this ridiculous spike sticking into my head while I run around in circles with only socks on?” Exactly. My post will make as much sense as the preceding sentence.

The day started off innocently enough. I woke up early and hit the trail for my first hike in what feels like forever! 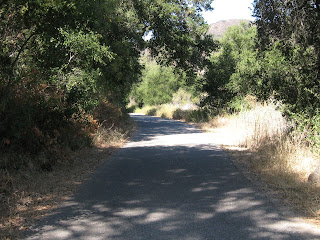 We had a beautiful, 70 degree hike down the hill. 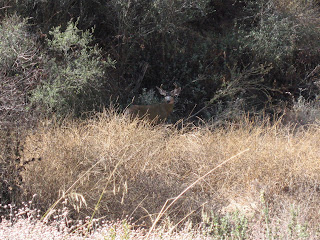 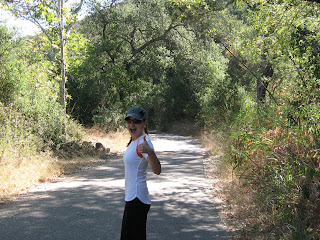 I was understandably excited.
The hike was quite intense, and I felt that the best way to refuel would be to hit up an Indian buffet and get a ridiculous amount of food. This ridiculous is the good type. 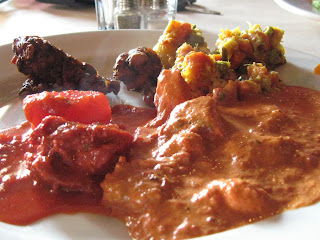 Spicy chicken vindaloo, chicken tikka masala, veggie-punch-in-the-face-it’s-so-spicy dish, and fried green somethings. It was all amazing, as were the two pieces of garlic naan I used to scoop up all the sauce. AND the gajar halwa (carrot-butter pudding) I had after.
Then came work. I was scheduled for a full shift, and had to work until 11pm. ELEVEN PEE EM! It all began to go downhill around 5pm. Vicky and I headed out to Paciugo to get hopped up on sugar, and discovered that Paciugo is now offering even MORE opportunities to get free gelato! 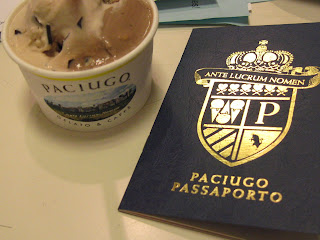 PACIUGO PASSAPORTO!!! I got a small with amaretto chocolate chip, rocky road, and peanut butter cookies ‘n milk. Tomorrey, we’ll explore the innards of the passport. It’s extremely amazing!
About two hours later, I was really starting to lose it. There were no customers in the store, and even fewer employees (“But that’s impossible!” you say!) and I decided it was time for me to adopt a lonely hanger that had ended up at my counter, abandoned by the evil consumer who ripped it from its shirt-brother and discarded it like an empty plastic hanger. 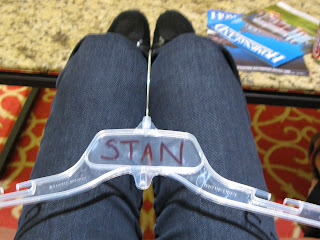 Everyone, meet Stan. Stan, everyone.
And yes, I realize that by now I had completely lost it. 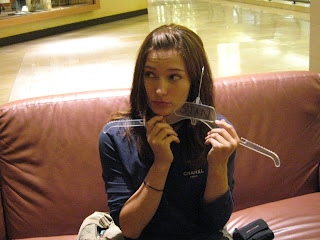 No, I think HERE was where I’d completely lost it. 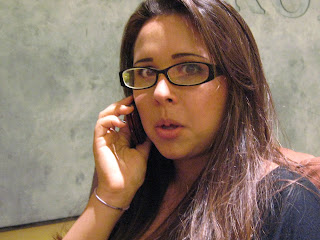 Vicky was frightened, but she learned to accept Stan for what he is. This is why I love her.
Vicky, Stan and I headed upstairs for the employee potluck lunch. This lunch consisted of fried chicken, barbeque chips and Coke®. It hurt. So good. After we’d parted ways (Vicky and me, not Stan and me), I received a text message from Malachi. Our insane brain-candy conversation follows:
Malachi: Boo i’m feeling antsy and all my friends are unavailable and it’s saturday night and dan took the car so now i’m just going to sit here doing nothing which i already did all day SON OF A BALLS thanks for letting me vent.
Me: I’m at work till 11pm and i made friends with a hanger and named him stan and took pictures of him for my blog which i will post at 1am.
Malachi: Sounds like you’ve already reached madness. Save me a seat, i’ll be there soon as well.
Malachi again: I’m drowning my sorrows in pepsi and the economist.
Me: I have coke. Not the good coke either. Soda form, not powder. (Disclaimer: I do not use/condone drug use. They will drain the blood from your body and replace it with swamp water and you will die slowly and painfully. So don’t do them!)
Malachi: Ugh. You could always dehydrate the coke, distill it to powder form, and shoot that up your nose.
Me: I need a quick fix idea, not scientific conundrums that take weeks to execute.
Malachi: You can’t rush good science. And every druggie has the rigors of the scientific method to thank.
Me: My problem must be that my addiction isn’t so intense that i appreciate the rigoroditty of the process.
Malachi: As Newton said, and Einstein agreed, ‘rigoraditty is the keystone of scientoriousness’. (Malachi, you misspelled rigoroditty. LAME!)
Me: What is easier to make fun of… A comatose ninja, a comatose pirate, or a small child with ADHD whom you fuel with soda, then tie to a chair and throw popcorn at? (Before you hate me for being an evil child abuser, please remember that I have at this point befriended a hanger and might not be all there…)
Malachi: You are past madness. You are traversing space, time, universe.
Me: There is nothing wrong with desiring to throw puffy food stuffs at children. (See guys, I didn’t recommend we throw anvils at them or anything!)
Malachi: …textual silence…
This correspondence occupied a good half hour of my time, in which I sauntered around the dark, empty mall and got a makeover a la Vicky. I then proceeded to sprint around the dark, empty mall, pretending to be chased my extremely short zombies, and ended my spazz-out with a cup of lemon pudding cake. CAKE IN A CUP! And some patriotic mints!
I apologize if this post has traumatized you in any way. These spazz-outs may occur once in awhile, especially if I’m forced to work insane hours with only a hanger to talk to.
On a semi-normal note: 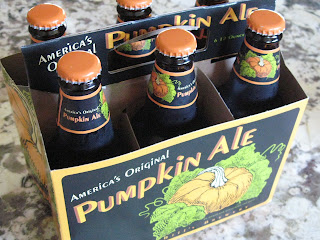 I FOUND ME THE PUMPKIN ALE!!!
I shall imbibe tomorrey evening after…work. Le sigh.