Last night, I went over to the boys’ place for beer tasting and homemade pizza! I stopped by BevMo on my way into town and was assisted by some incredibly knowledgeable, helpful workers who didn’t ignore me just because I look like I’m seventeen years old. Brownie points for that! I explained that I was trying to instill a sense of appreciation for beer in the minds of a certain gentleman who doesn’t like beer, and a certain gentleman who is satisfied drinking Pabst Blue Ribbon, and we picked out some hefeweizens, ambers, stouts and porters for the tasting. 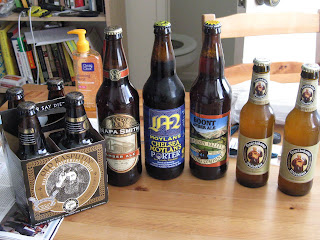 From left to right: Old Rasputin Russian Imperial Stout, Napa Smith Amber Ale, Chelsea Moylan’s Porter, Boont Amber Ale and Franziskaner.
Dan was busy chef-ing so we set the brews in the fridge to chill while I documented the cooking process. 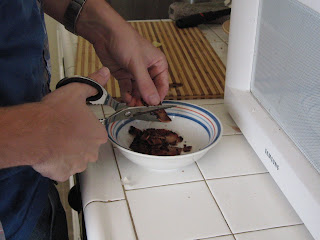 What is that, you ask? Let’s take a closer look. 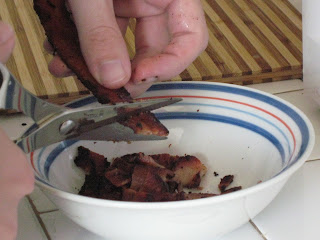 SCISSOR-BACON OF COURSE!!! Dan got all fancy on us!
Since the boys were busy chopping, cutting and sauteing, I decided to treat them to a little serenade. 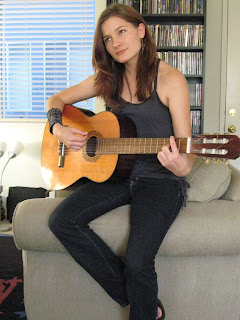 That note I’m playing right there is an L-flat.
I have no idea how to play the guitar.
We started our tasting with the Franziskaner. 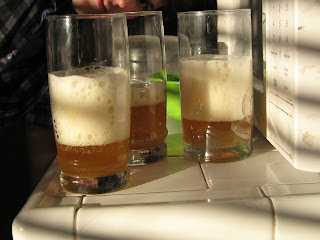 I got a little excited and poured much too fast. Whoops. 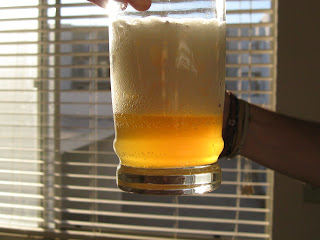 I taught the guys how to fully appreciate a good beer. Let’s go through the steps:

Malachi, the non-beer-enjoyer, actually liked the Franziskaner! He specifically said, “I like this!”. I was quite thrilled. Dan liked it as well, but I think he was just happy to have some free beer – he’s obviously not picky since he can drink PBR. Up next was the Boont Amber Ale. 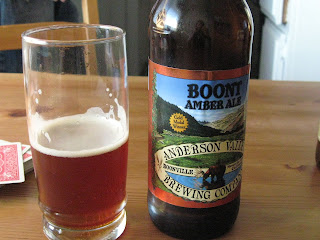 This one was delicious! It had very strong notes of caramel in both the smell and flavor, and just a hint of sweetness.
Dan finished his masterpiece pizza while Malachi julienned some mint to put atop our salads, and we sat down for feasting. 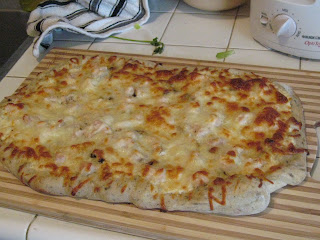 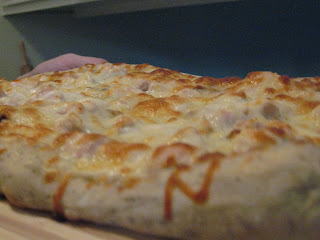 Freaking delicious! This was made with Trader Joe’s Garlic & Herb Pizza Dough, and topped with alfredo sauce, chicken, bacon, and copious amounts of wonderful cheese. 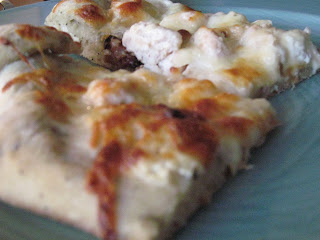 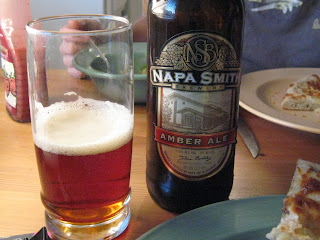 The Napa Smith Amber came next. This one wasn’t my favorite – a little too light and watery tasting, not very memorable at all.
We moved ahead to the Old Rasputin Russian Imperial Stout, one of my favorites, which was liked by Dan, but not by “I don’t like coffee OR beer. Bwaaaaaa!”-Malachi. After sampling the stout, we had some of the Chelsea Moylan’s porter – this one had the same espresso taste as the stout, but was a lot smoother to drink. That, or I’d already had the equivalent of a beer and a half and was starting to feel tipsy and not as studious as I should have been. That may have been it… 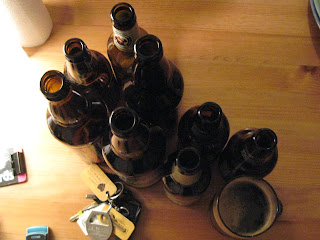 Yeah, that was definitely it… 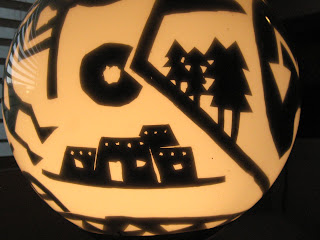 On a random note, here’s a lamp that Malachi made!

We played a rousing game of Pimps & Hoes (also known as Egyptian Ratscrew), then decided to head out to do some location scouting for a top-secret-insanely-awesome-epic film that Dan and Malachi are working on. DISCLAIMER: We did not drive after drinking. Every single place we went was on foot!!! 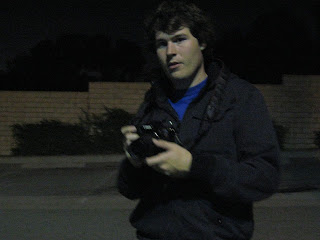 Well, hello Dan, with your fancy-schmancy camera standing in a dark creeper parking lot at 10:30pm beneath a ghetto street lamp. 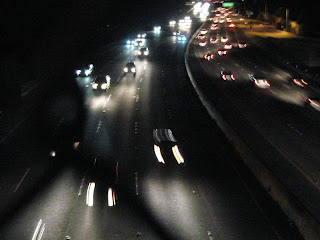 We crossed back over the highway (my first time walking over a highway! I’m from Colorado, what do you expect?), and headed over to The Fox and Hound’s for some live music. 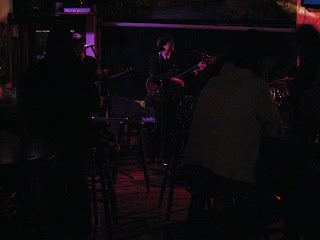 There was a Beatles cover band playing. It was pretty awful – after every song, they would drunkenly thank each other in character, “Thank you, Ringo. Paul, did you write that one? Cheers, mate!” until they realized that they should probably start playing another song. 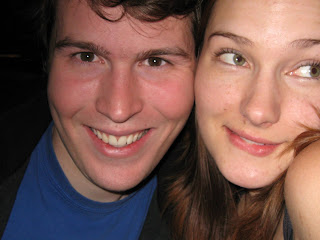 We ignored them the best we could and started taking some more random pictures. 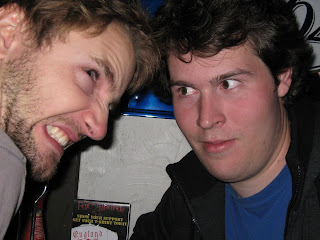 Malachi was not pleased with the bands’ creepy wigs and ramblings. I also put my wristband to use! ID and credit card secure and no purse concerns!
Thanks, Banjees!
We waltzed back over to the boys’ place and made an impromptu movie about magic card tricks. 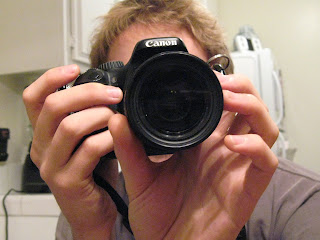 You’ll have to wait for Dan or Malachi to edit this and blackmail me on YouTube.
It was quite epic.
We dug up some dirty laundry and watched a few films that Dan and Malachi had made in school, an old Lonelygirl15 video in which I carry a riding crop (!!!), and then Malachi took ownership over Dan’s Facebook and Google account and left comments for everyone in the entire world– one is viewable on my blog under yesterday’s post! We finally passed out around 3:30am. 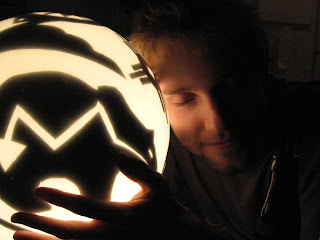 It was a good night.
I woke up this morning with only a slight headache, drank massive amounts of water and sat in on a pre-production meeting for the upcoming top-secret-insanely-awesome-epic film, then headed off to meet my friend Tanya for lunch. 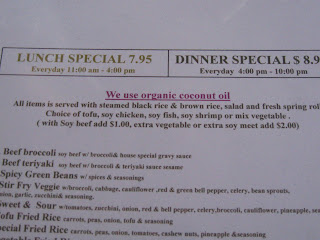 Tanya recently became a vegan, so we went to Vegan World, a cute little hole-in-the-wall restaurant in the middle of a shopping center in Studio City. 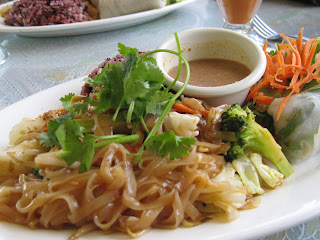 I got the pad thai with mixed vegetables and a thai tea. The food was wonderful, but there was just too much on the plate! The waitress looked worried when she came to our table and asked us if there was anything wrong with the meal – we reassured her that it was wonderful and got doggie bags.
I found a friend on my car after lunch! Everyone, meet Harris: 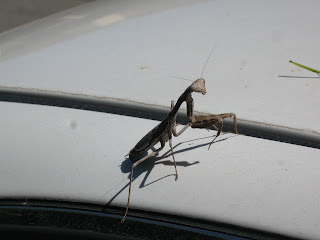 A PRAYING MANTUS!!! I think he read my recent blog post about putting him in hot dogs and came to threaten me. We talked it over and it’s all good now.
Don’t forget to enter the pottery giveaway! Just leave a comment saying why you need a piece of my deformed pottery, then link to my blog on your Twitter or Facebook 🙂