I just got back from an hour at the hotel gym. After a 12 hour day. After 5 hours of sleep. Needless to say, this blog will be quick, otherwise I may fall asleep on the keyboard. 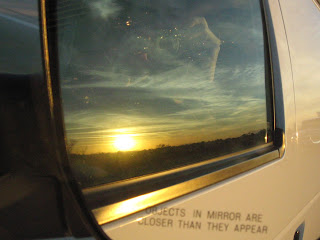 BAM! Sunset on the drive out. 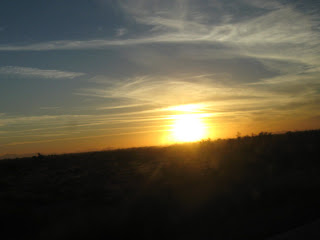 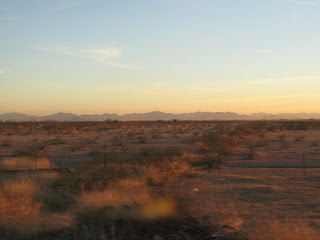 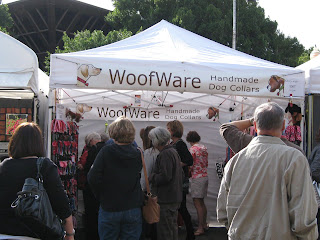 Rat-a-tat-tat! Busy booth at the festival! 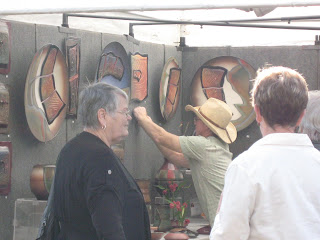 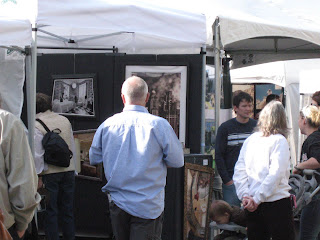 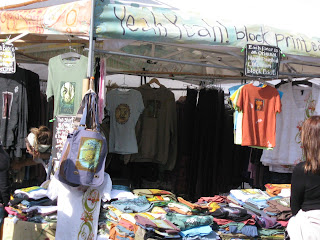 BOOM! Clothes made from plastic bottles! 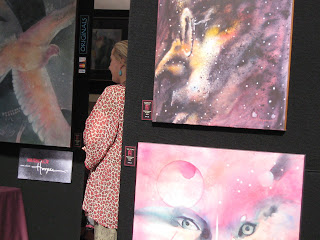 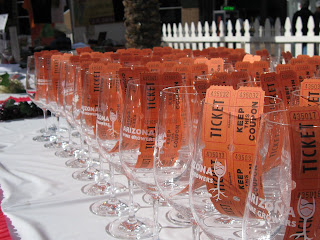 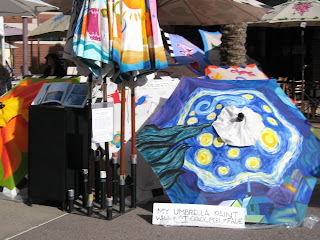 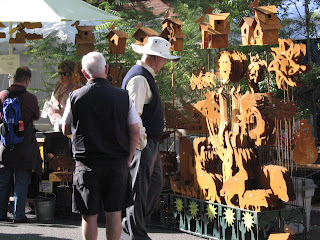 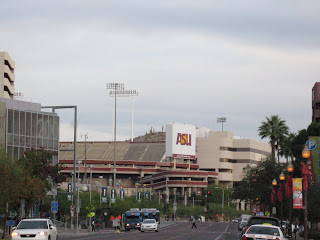 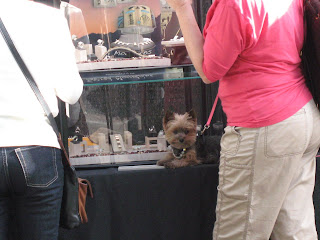 BARK! Dog on a jewelry counter, trying on a diamond-studded collar. 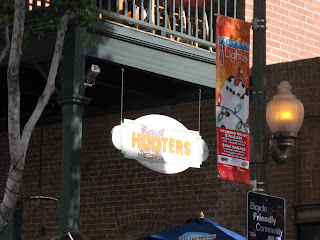 HONK! Hooters directly across from our booth! 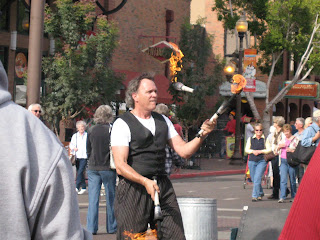 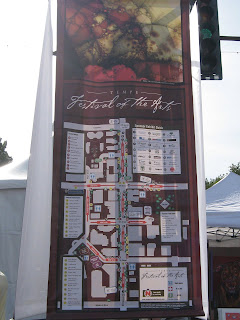 Kaplooey! A map of the gigantic show! 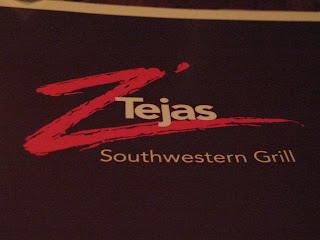 Ole! TexMex restaurant we ate at for dinner tonight! 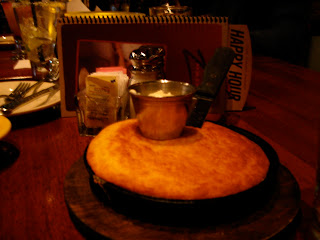 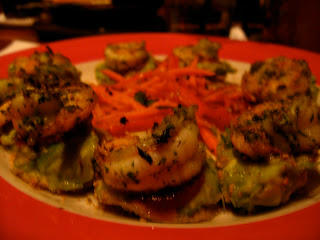 The Monstas are back!!! 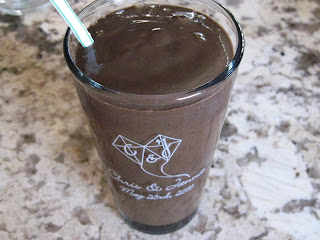 Or they were yesterday! This baby had 5 cups of spinach, 1/2 a banana, 1/3 a cup of soymilk, 1/2 cup of frozen berries, 1 lemon and a splash of vanilla extract. 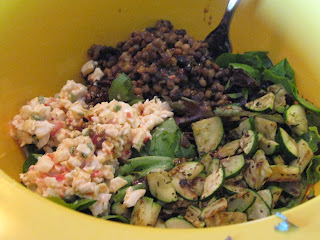 I followed up with a green lunch. I had a big Kitchen Sink Salad with 1/2 a bag of mixed baby greens, 1 sauteed zucchini, 1/2 a container of egg white salad, 1/2 a cup of warmed lentils and 1/2 of a red bell pepper.
Today didn’t start the same. I had a hot boiled egg and had to run out the door to work an early shift. I bailed out after four hours so I could go to an audition in Valley Village, then went to meet up with Dan for lunch. 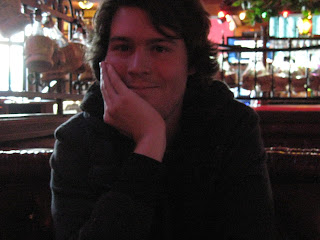 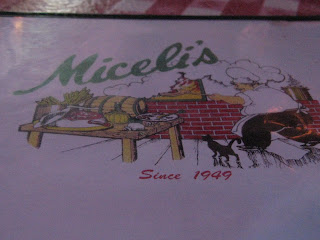 We went to Miceli’s on Ventura Blvd. 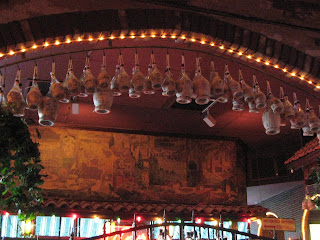 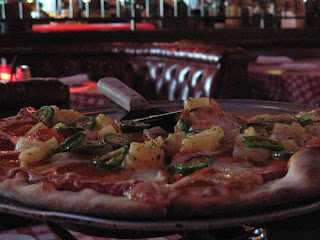 We split a FIRE IN THE HOLE!!!! Has anyone ever heard of that? I hadn’t, and neither had our waiter, but he had a lot of fun running around the restaurant yelling, “Fire in the hole!!!” and coming up to our table after we were served asking, “how do you like the fire in your holes?”
Very mature. 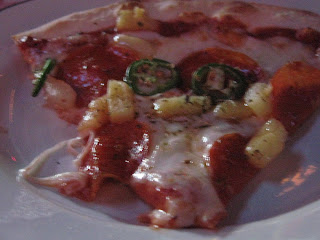 It was dark in there, hence the blurry pic. A FIRE IN THE HOLE has pepperoni, jalapeno and pineapple. I think I have a new favorite pizza!
After lunch I met up with Tanya at Starbucks on Ventura Blvd. If you ever want to see the most beautiful, narcissistic people in the world, there’s where you should go! I walked past the three outside tables, all occupied by gorgeous humans reading highlighted scripts, and into the cafe where there were at least a dozen people all working on screenplays on their computers. I totally blended in in my baggy sweatshirt, flip flops and jeans that have washed to shreds. Totally…
I had a tall soy chai and Tanya (now a vegan and looking AH-MAY-ZING!) had a decaf tea. We spent a while catching up, then headed over to Urban Outfitters to do some shopping and stumbled upon not only one, but TWO ridiculously successful actors. 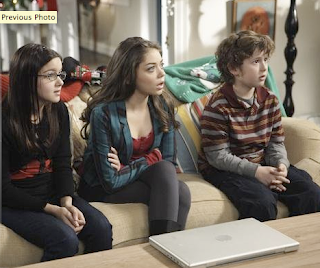 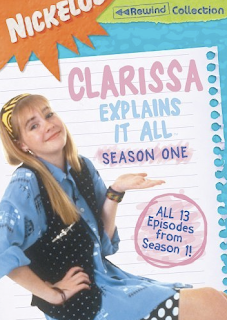 And Ms. Clarissa herself, Melissa Joan Hart!
I recognized them, but I’m not one to let them know! Gotta let those actors have their peace after a long day on set. Sigh, I’m not jealous at all…
It’s a crazy, small world out there in the big city! As for me, I’m off to another big city – Tempe, Arizona! I’m back on the clock for my artsy job and I’ll be at the Tempe Festival of the Arts from December 3rd through December 5th! If there are any ASU students out there, come visit! I’m right on your main street! As for YOU, prepare yourself for another onslaught of creative pictures of creative arts!
Don’t say I didn’t warn you!