A Day at the Harbor!

Wheweee! Today was hotter than the underarm of the devil. Lucky for me, I’d planned a day on the coast in Ventura where the temperature stayed around 75-80F. To begin, I woke up super early and had a big ole GM. 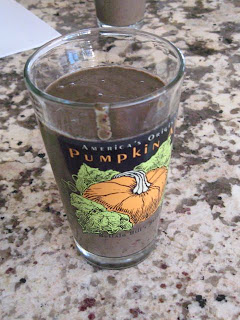 Not sure what exactly was in this because the roommate made it, but it was a good one!
Around 10am, I headed out with my new friend, the Irishman, and some crazy peeps (now known as the CPs) to the Ventura Harbor. 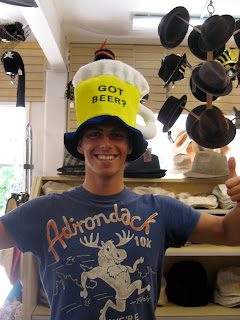 To introduce him to California, we took him to the funny hat store. I think this one suits him.
I had to twist a couple of arms to get everyone away from the hat store (It IS quite amazing), and finally landed a seat at the wonderful, famous ANDRIA’S SEAFOOD! 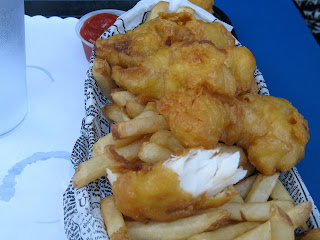 If you’re ever in Ventura, you MUST visit this place – and invite me to join you! They have the best fish ‘n chips in Southern California. I split a single order with two of the CPs. I hogged all the greasiest pieces. It was magic.
There just happens to be an arcade in Ventura Harbor, so we all loaded up on tokens and went to town!  The CPs played skeeball and foosball, I kicked the Irishman’s butt in air hockey (a tie means I win, okay?) and he kicked mine in a car-racing game. My car was broken. The steering wheel was messed up. The seat wouldn’t lock into place. The gas pedal stuck. I got distracted by the smell of more food – that’s why I crashed my car and rolled it several times! The Irishman was kind enough to let me know that I would not be driving the REAL car back home after that fiery mess on the game screen. He’s still trying to getting used to driving on the right side of the road, but doesn’t trust ME to drive? Rawr.
What came next, you ask? Only the second best food located in the harbor: 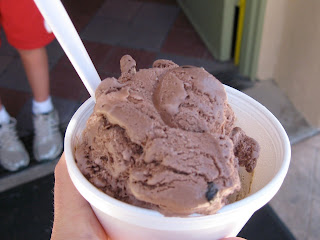 This is a single with half cappuccino crunch and half chocolate brownie. A single = two scoops. Yet another reason to love Coastal Cone!
We all walked in the lovely sunshine (Me loving sunshine? Who am I???) and meandered down the docks to look at all the boats. Half an hour was spent on a miniature floating dock jumping up and down and rocking it back and forth trying to make each other fall. We’re mature like that. After the sugar buzz wore off and the group started getting a little grumpy, we headed back.
I was completely wiped out from the sun (Pretty sure I sunburned my eyes somehow…) and excitement, but I had to make a few phone calls and get scheduling and location info for a low-budget shoot I have tomorrow. That amazing audition I had last Tuesday? Yeah, I booked it :). Two days of filming = Happy me! I’ve got a crapload of sides to work on tonight and even more laundry to do so I can pack up a little wardrobe to take. Call-time is 10am – yessss for sleeping in!
Dinner was a lovely Banana Jaffle: a recipe my dad found when he and my mom lived in Indonesia. It’s very complicated, so pay attention! 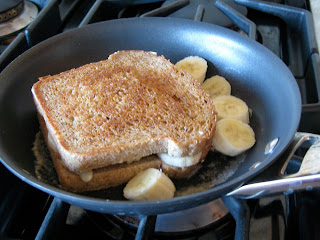 Banana Jaffle:
2 slices of whole wheat bread
1 banana
2 tbsp of salted butter, divided
1. Slice the banana into 1/2 inch segments, then liberally stack them onto one slice of bread.
2. Cover with the other piece of bread.
3. Melt 1 tbsp of salted butter in a pan over medium heat.
4. Put the Jaffle in the melted butter.
5. Let it sizzle for about 5 minutes, checking the underside every minute to make sure it doesn’t burn.
6. Once brown, carefully lift the Jaffle out of the pan.
7. Add the other 1 tbsp of salted butter to the pan.
8. Once it’s melted, put the Jaffle in the pan with the uncooked side down.
9. Let it sizzle until brown.
10. DEVOUR.
TIP: Cooking it over a lower heat for a longer period of time makes the bananas inside steam and soften and practically melt. So good!
I told you, it’s a tough one. It’s imperative that you use salted butter! If there’s no salt, then the sweetness of the slow-cooked banana can’t explode in your mouth and carry you to a heavenly paradise. I had a few extra banana slices left over, so once I flipped the Jaffle, I threw those into the pan and let them caramelize. 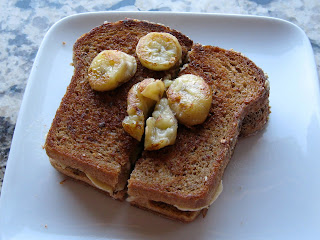 Love on a plate. 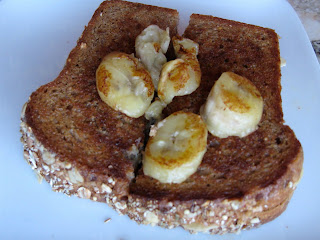 Another view: Caramelization!
Dinner was supplemented with Magners! 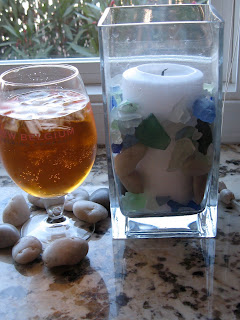 I love that BevMo! carries 12oz. bottles of Magners now! I also love that the woman at checkout told me I wasn’t old enough to carry them out of the store :).
After dinner, I downloaded my callsheet and sides and took them outside to read whilst enjoying the warm evening that was FINALLY cooling down. There’s nothing like sitting out back on a warm night, sipping an icy Magners and watching the sunset creep through the canyon. Happy sigh.
I am a blessed, thankful girl. It was a great day.
Are there any heirloom recipes that have been passed down through your family? My family has DOZENS, if not a hundred!

I repeat what I said in the title. BEST. FATHERS’ DAY. EVER. Honestly, epic! Many, many pictures to follow: Hopefully you can handle the awesomeness… 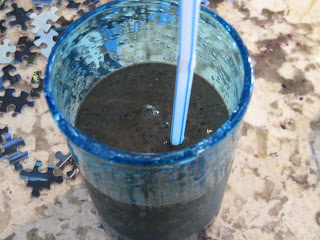 I started with a mini-Monsta. This had about 2 cups of spinach, a little soymilk, frozen cherries, half a banana and some lemon juice. I had to have an appetite for lunch!
First, I had to give my pops all of his loot. He was very, very spoiled :). 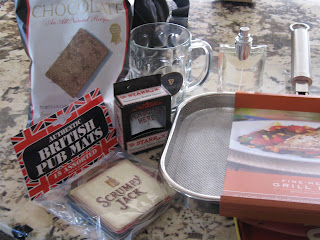 We have (from the top left, going clockwise) chocolate tortilla chips, a Guinness mug, a grill pan from Williams Sonoma, a stationary bottle opener, and some authentic British pub mats.
For lunch, we headed out to… INDIAN FOOD! I had two gigantic plates: don’t judge! It’s a weekend of celebration. I can get back on track tomorrey. (I say and spell the word “tomorrow” like tomorrey. Deal with it.) 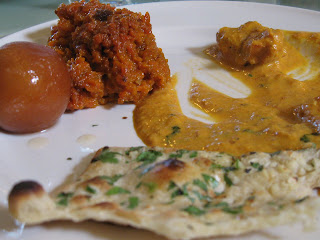 I had gigantic servings of saffron chicken, daal, vegetable korma, LOTS of naan, and for dessert, carrot-butter pudding and one of those doughy-syrup-covered balls. YUM!
After lunch, we walked around for a bit and ended up in a furniture store. Woohoo…happy fathers’ day :P. 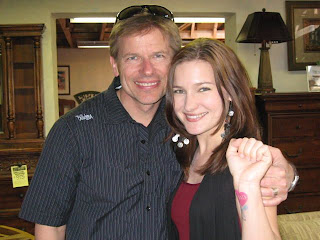 Then, we wandered over to Dargan’s, the local Irish pub, and had some drinks. 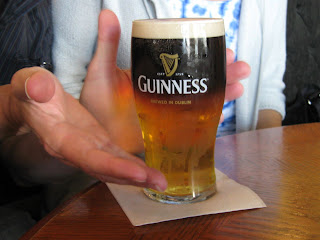 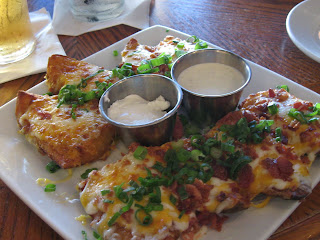 We were COMPLETELY stuffed, but we somehow managed to fit in some potato skins :). HEY! It’s a weekend for celebration!
There happens to be an amazing used bookstore on Main Street, that I must stop in every time I’m in Ventura. 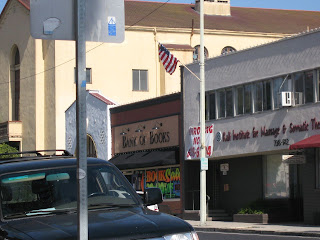 We saw a new pub that we’ve never tried before, called Bernadette’s – LOVELY Bernadette, the owner, showed us around and made us feel entirely welcome, and Allison helped us with everything we needed – I sense a new Sunday tradition! They had live music, so we decided we had to sit for a spell. 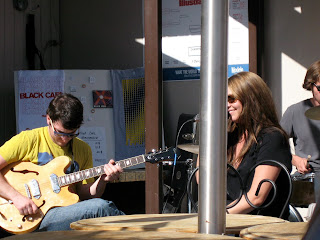 I’d like to introduce you to Black Carl. Seriously, go to their site and listen. They are incredible! 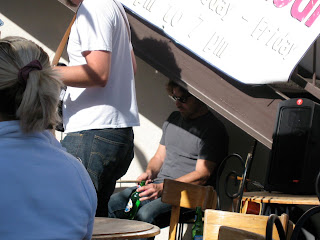 That’s the drummer using a beer bottle as percussion. BOOYAH! 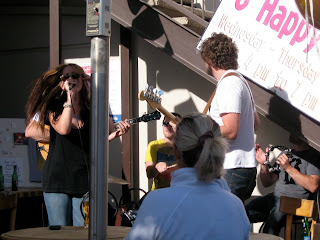 Everyone needs to go to their site and subscribe and follow and listen and LOVE them! Tell them the Bexter @ HikeBikeEat sent you :). I bought their CD onsite and got a bunch of awesome pins and matchbooks.
We all seemed to enjoy the music. <– Video goodness! 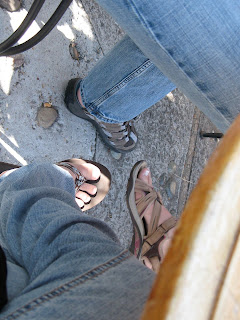 There were lots of feet bouncing to the beat: rhyming makes me happy :P. 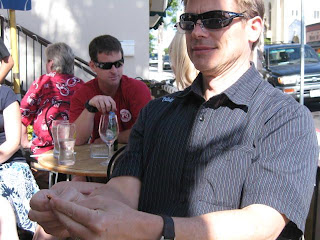 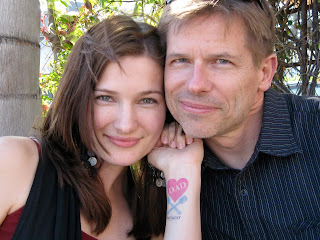 We get along very well… 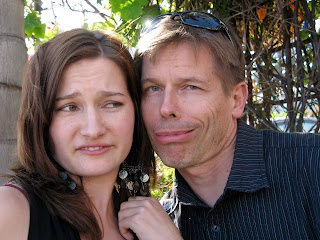 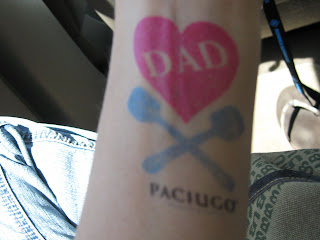 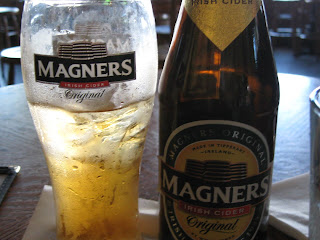 I found one of my new favorite drinks, recommended by my cousin Allie who is currently traveling all over Europe! Magners = deliciously crispy, dry, and not too sweet! 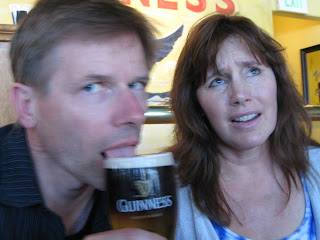 My dad definitely had a great time. My mom enjoyed it once the music got started, teehee!
After an amazing day, we headed back to have some awful, awful dinner… 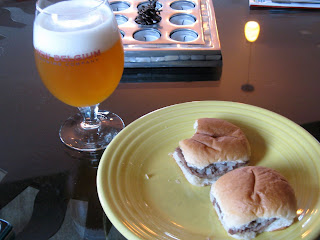 White Castle burgers and Franziskaner – my dad wanted it, so I had to have some – it’s Fathers’ Day!
…And cuddle with the Buddha! 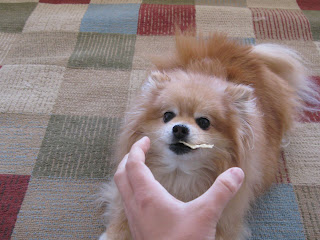 (No, I’m not actually strangling her) She gets VERY possessive over her chips! I almost lost my entire hand after this picture.
And now I will leave you, having forced many, many pictures unto you, and watch the rest of The Next Food Network Star. I finished The Death and Life of Charlie St. Cloud: meh. I have a feeling the movie will be better, at least based on the trailer. It was a good/okay book, but wasn’t anything too memorable.
Happy Fathers’ Day to all the dads out there!