A Morning of Firsts, and Lasts

I didn’t mean to… I swear I didn’t! Last night, I promised you all that I’d eat two ice cream bars, but I failed. I only ate one. I guess it’s a good thing that one satisfied me, but after my promises of not lying to you anymore, I felt guilty. Just had to let you all know the truth.

Bad news: I ran out of spinach. There was no GM for me this morning. Instead, I decided to try the overnight oats that I’ve read so much about. I used the vegan version from Oh She Glows. Luckily, I had picked up some chia seeds at Sprouts before the farmers’ market on Thursday, so I was able to throw all the ingredients into a bowl. It looked a little scary… 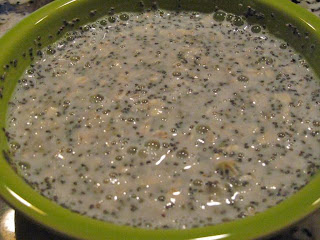 When I woke up in the morning, it looked even scarier. 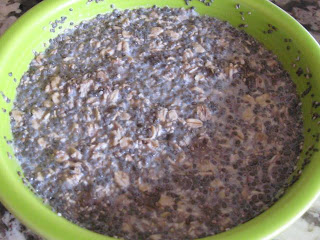 Then I stirred in a tablespoon of flaxseed peanut butter and a drizzle of maple syrup and it looked like it was going to crawl out of the bowl and beat me up. 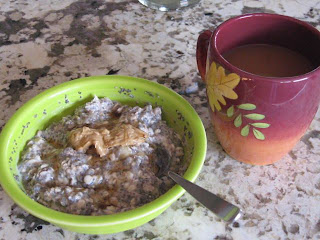 I’ll say this nicely – I’m NOT a fan. Cold oatmeal and I just do not mesh. It was chilly and slimy, and after every bite, I took a sip of coffee like a chaser to get rid of the shivers it brought on. Maybe if I ever get the guts (ewww, that’s what it reminds me of) to make it again I’ll reheat it and try it warm. Have you ever heated up overnight oats? Did it make them inedible or better?
When I got to work, I diligently focused on my responsibilities. 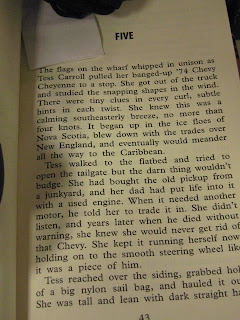 That’s one of the pages of The Death and Life of Charlie St. Cloud. The only copy that was available in my library was a large print. When I want to read something badly enough, I’ll settle for this, but large print takes some getting used to! Personally, I find it harder to read than regular.
I also got to hang out with some of the boys. 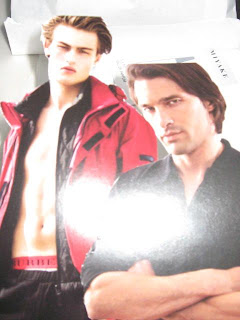 They hang out with me when I have a snack break and guard my purse from the delinquents who may try to steal it. They’re chill.
My annoying stomach started going off an hour into work, even though I’d had massive amounts of cold, clammy protein in the oats and peanut butter, so I swung by See’s Candies to get a sample. The workers at See’s know me. They know me well. I paid for two pieces, and this is what they gave me: 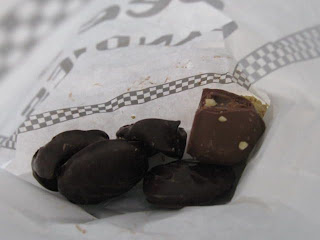 I ask for two, I come out with five. I hate those workers so much…and yet I adore them! Double caramel FTW!
For lunch I had a mini spicy tuna roll with brown rice and sriracha soy sauce, yet again. I met up with my friend Brittany and we sat outside in the beautiful sunshine, enjoyed the fresh air and dreamed about what we could be doing if we had money and weren’t trapped doing retail. Girls gotta dream 🙂 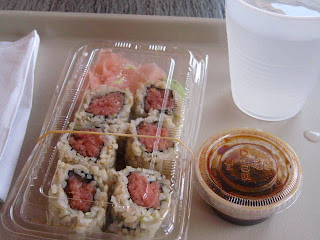 I bailed on work early. I just couldn’t take anymore standing around and reading, plus I had to pick up the roommate from the train station. I got home, sat in a comfy chair, tweeted about how I never wanted to get out of it, then finally got up and made myself a mini-KSS. 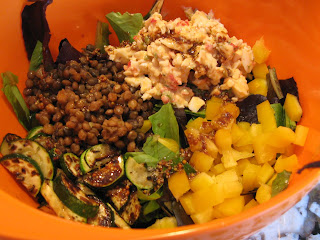 This baby had lettuce, warmed lentils, half a bell pepper, half a container of Spicy Ranchero Egg White Salad, a sliced and sauteed zucchini all tossed with about 2 teaspoons of homemade dressing. I feasted. I smiled.
I headed on down to the train station, picked up the adored roomie and came back to catch up over a Franziskaner (for me) and a glass of wine (for her). Then I realized I needed to write my blog before I fell asleep in the aforementioned cozy chair, so I opened up a coconut milk ice cream bar, and here we are.
Tomorrow begins a week of housesitting, so my blogs may be slightly sporadic because I don’t get internet connection over there – BOOOOO! I hope you all enjoy your Saturday nights, and aren’t as lame as I’m about to be – passing out in said chair before dragging myself to bed.
Bon Nuit!