Ahh, the weekend is so close I can smell it! It’s just too bad I can’t enjoy it – I work six days in a row! It’s going to be painful on my feet, but feel so good on my wallet!

This beautiful Thursday started with a Monsta. 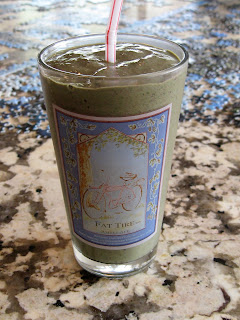 This sucker had 3 cups of spinach, 3/4 a cup of unsweetened soymilk, the juice of 1/4 of a lemon, 1/4 a cup of frozen cherries, 1 tablespoon of flaxmeal, and half of a frozen banana. I think the frozen banana really makes it smooth for some reason – there were no big chunks or strings today!
I was all set to go on my morning hike, and then… I didn’t. No reason. I just didn’t. I woke up SUPER late (after 8am!), had a coffee, made my GM, and by the time I looked at the clock again, it was just too late to go. I had a lot of errands to run today and starting after noon just makes me feel unproductive and stressed.
Instead of hiking, I went with my roommate to The Natural Cafe to use a buy-one-get-one coupon for lunch. I picked my favorite, the Local Favorite :). 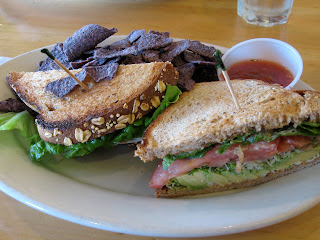 This is avocado, alfalfa sprouts, tomatoes, red onions, lettuce and a thin layer of garlic mayonnaise on toasted 9 grain bread.
My roommate chose the special of the day. 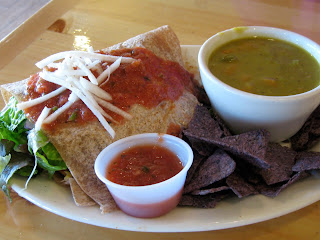 This had grilled chicken, pinto beans, lettuce, sprouts, onions, salsa and cheese in a whole wheat tortilla, topped with more salsa and jicama, and a side of vegan split pea soup. 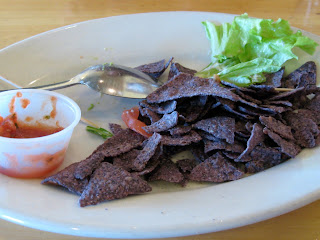 I demolished mine.
Next we headed to Barnes and Noble to glance around. I found a book that interests me very muchly – I’ve put it in my favorites to the right –>
It’s called The Flexitarian Diet by Dawn Jackson Blatner. I think I’m going to become a flexitarian. Flexitarians live a mostly vegetarian lifestyle, but still allow themselves the occasional burger or piece of chicken. I’ve wanted to lower my meat intake and focus on veggies, grains and fish, so this seems to fit my lifestyle right now. I haven’t bought the book yet though – I requested it from my library instead – I’m very cheap!
Menchies just happens to be next door to the bookstore. 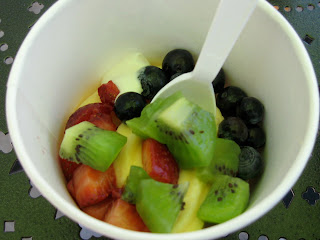 I got a SMALL amount of dairy-free mango sorbet and topped it with strawberries, kiwi, blueberries and a spot of marshmallow creme, just because I had to try it once! It was GOOD!
I stopped by a specialty wine/beer store and picked up some Old Rasputin stout and a beer that’s been brewed like champagne (don’t ask me what that means, I’ll look it up and tell you tomorrow) so I could have a tasting with some friends tomorrow night. When I got home and threw the bottles in the fridge, I remembered that I’d wanted to try a recipe for a sweet omelette that Heather (Heather Eats Almond Butter) had posted about a few days ago.
I beat two egg whites with a hand-mixer until they were big and fluffy, then mixed in an egg and two teaspoons of vanilla. I poured the pretty batter into a frying pan that had a thin layer of (gasp!) butter in it. 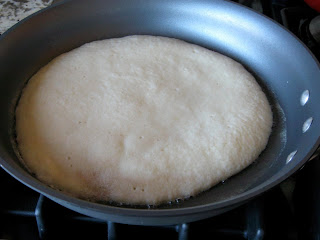 So fluffy! And it was a LOT bigger than I was expecting! 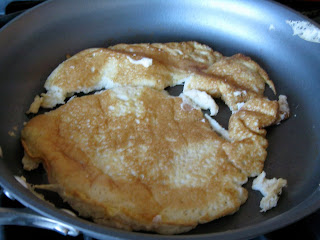 And very delicate as well. The flipping didn’t work out how I imagined… 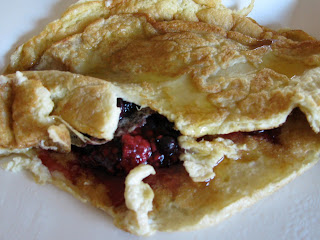 I filled it with a berry mixture – I thawed 1/4 a cup of frozen berries then mixed in a little agave-maple syrup, folded them in between the omelette and drizzled more agave-maple on top. Seemingly weird combo, but I was impressed! YUM!
Work was the usual – lots of reading, walking around, trips to Paciugo…
(I got another blurry soy chocolate. Not picture-worthy)
There are summer concerts going on in my town now! Tonight was a tropical rock band. 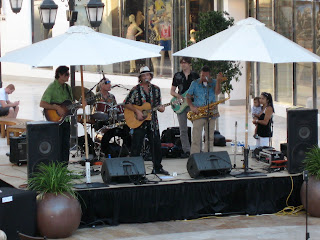 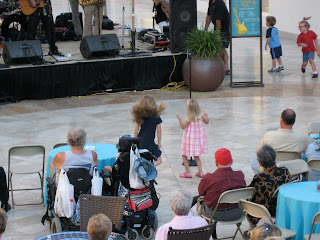 All the little kids were dancing up a storm! Pretty cute!
I went to a clothing store to try on a few shirts – I need some more for work since we have to wear all dark colors – boo!
Florescent lighting is a horrible invention. I picked a shirt I liked after cursing at all the other ones that looked horrible in the light, and as I turned to walk out of the dressing room, I saw this: 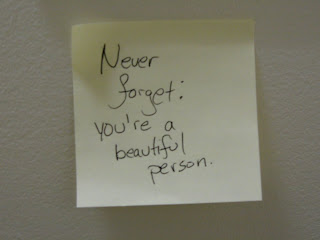 Isn’t that lovely?
After I paid, I was walking out and saw something that made my day even BETTER! 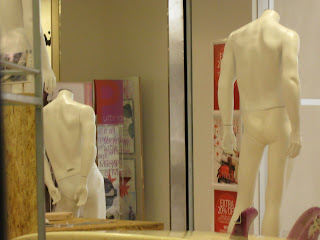 Teehee, the mannequins are clenching – I’m such a dork!
There was only one more thing that could make this day absolutely perfect – a sunset. 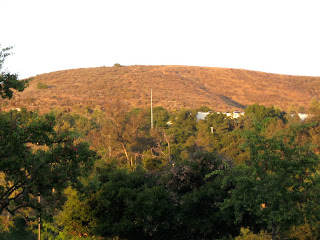 Okay, it’s just the rays of a sunset shining on a hill, but I’ll take it!
What one thing would make your day perfect?
And now I’m off to crash so I can wake up early enough to make a GM, coffee and attempt to look pretty for the opening shift at work. Wish me luck! I’ll need it!

Ahh, the lovely substitute-Sunday. This Tuesday has been a day of delight for me. I get back on the work wagon tomorrow, so today I lived it up!

First, I’ll start you off with a picture of last night: 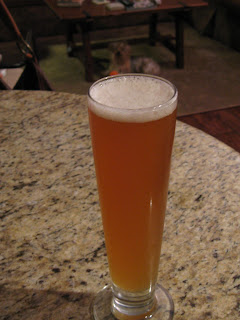 That is Mission St. Hefeweizen. It was very cheap at TJ’s, but the checkout lady said it was the best cheap beer around. She wasn’t lying!

Woke up exceptionally early because the shades at the house where I’m staying do not keep the light out AT ALL! I was up at 6:30am, covered my face with pillows until I got a lovely text from my mum at 7am – Thanks mom :)!

I ran downstairs and was all prepped to make myself a GM with the frozen berries I found in the freezer, but when I pulled them out, I saw a big “SUGAR ADDED” stamp on the bag! Who buys stuff with SUGAR ADDED??? Crazy stuff, I tell you. Luckily, they had also bought fresh blackberries, so I threw a handful of those into my GM. 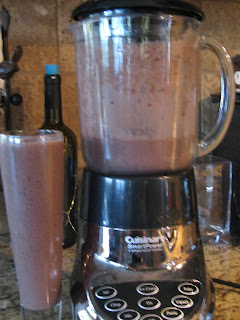 I physically can’t measure out a single GM for myself. I had enough for two full glasses! At least it was nice and purple instead of a scary brown!
My GMs haven’t been filling me up, so I toasted a slice of my new 9 Grain bread from Great Harvest, and smeared about a teaspoon of Nutella on top. The Nutella had less sugar than the JIF that was in the fridge, how ridiculous is that? Why add sugar to your peanut butter when it’s so wonderful by itself? 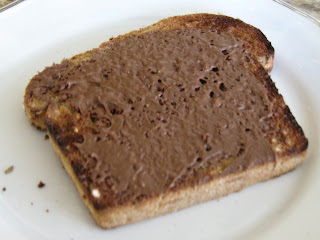 After watching a Food Network show to wake me up (Chopped FTW!), I went to hang out with my mom on a trip to Michael’s. I bought two glass jars and some broken sea glass – can you guess what I’m gonna make? I also bought an ocean breeze and lilac scented candle for $.78. I love cheap stuffs!
For lunch we stopped at Bristol Farms. I was drawn to the panini in the deli section, but they all had cheese -BOO! Next to those panini were a few different selections of flatbread. I saw a chicken pesto flatbread and asked if it was dairy-free, and they said YES! Hardly anyone makes pesto without adding parmesan cheese nowadays. I asked them to heat up half of the pita and box the rest. 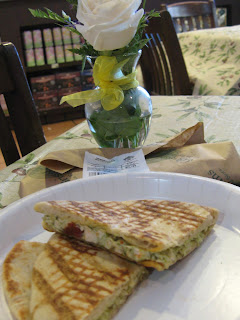 This was AMAZING! Inside of the wrap there was creamy pesto, moist chicken, and garlic-soaked cherry tomatoes that burst in my mouth. I was in heaven!

We looked around Bristol Farms for a few minutes and found some amazing things – the cheese section, the bakery, and the beer section! 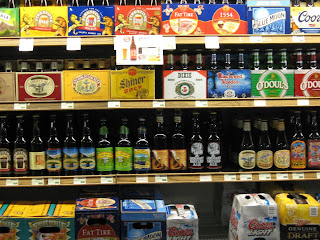 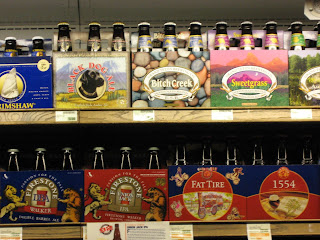 I need to try that top one :). Not ONLY because of the name, but because it’s from one of my favorite places in the world: Jackson Hole, Wyoming.

I headed back to the dogwatching house for some studying. I’ve been working through my homebrewing book and taking notes – LOVE IT! So excited to get started :)! I’m going to check out the homebrewing supply stores in Woodland Hills and Culver City, and take a class or two before I splurge on all the equipment so I feel confident with the process and not completely overwhelmed. I’m positive I’m going to love it though – it’s in the family (my bro and sister-in-law are really talented brewers).

Dinner was the rest of that flatbread. Sorry – very boring. Delicious, yes, but boring. I had some beer post-dinner. Franziskaner is my current favorite Hefewiezen. Very clove-y and smooth. 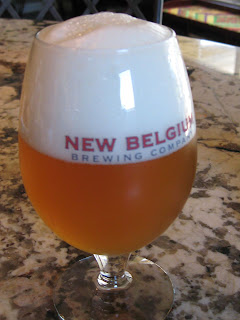 It’s from Munich, so it’s REALLY really good!
Now I’m off to the house of LBM to have an ice cream sandwich (I didn’t have one last night! I pulled it out of the freezer, but put it right back. I must have cured my sugar cravings!) and go sleep before an early morning hike followed by a full shift at work. Back to the grind – sigh.
Happy almost Humpday 🙂