My job is awesome. Awesome and delicious. I’m the craft beer pairing and education specialist for my company, which means that I get to help design beer pairing menus and participate in drool-worthy dinners. 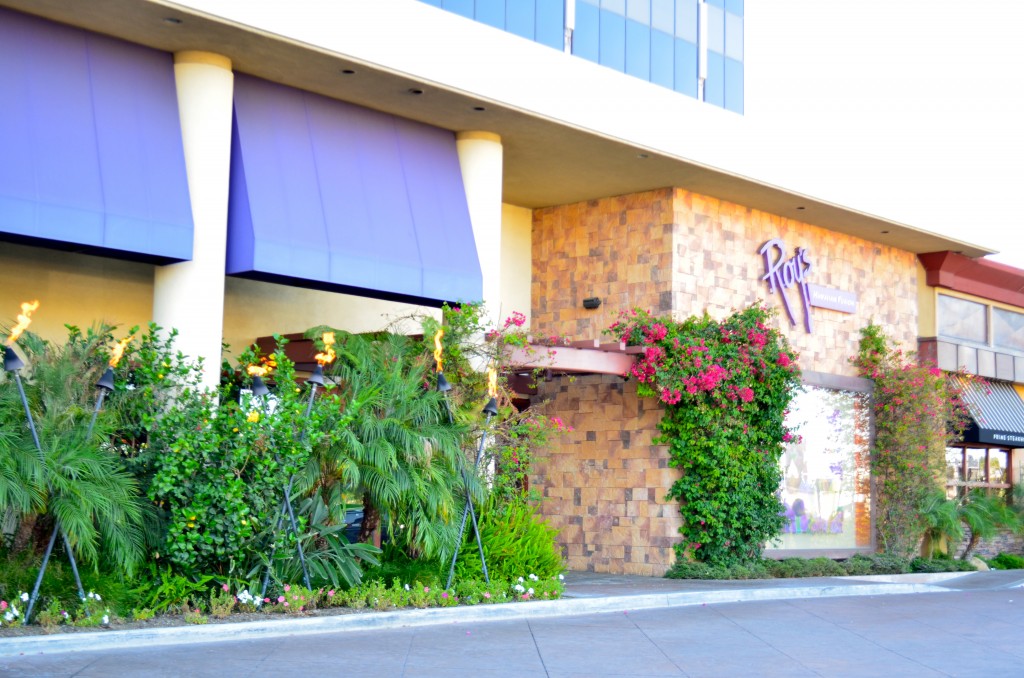 Last night, that dinner was at Roy’s Hawaiian Fusion Cuisine in Woodland Hills. If you follow me on Twitter, you got a preview of what I’m about to show you. 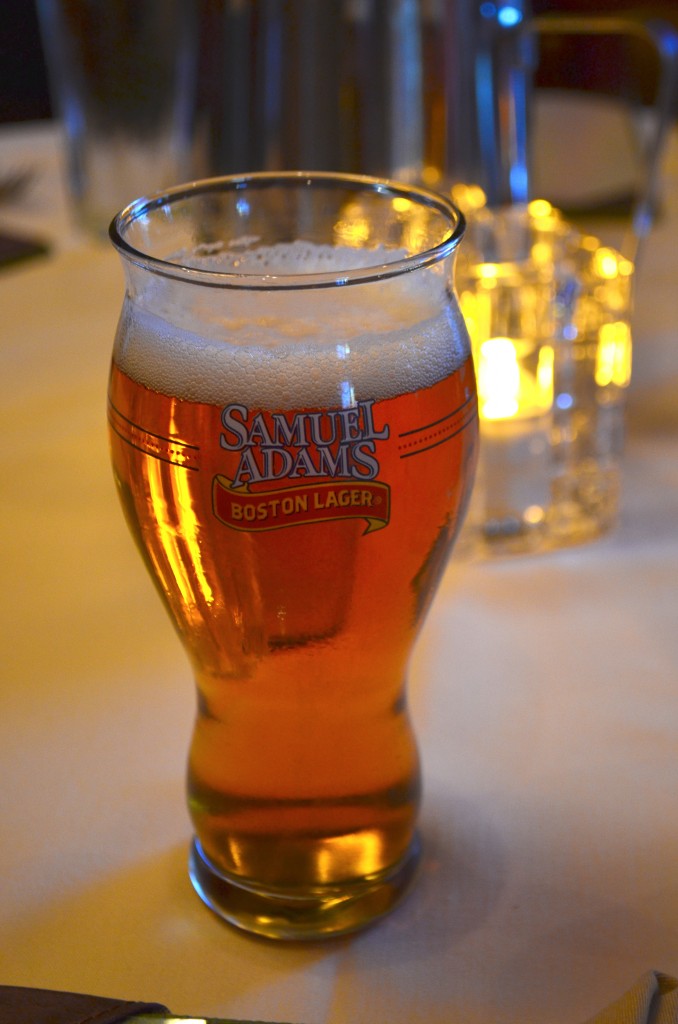 Samuel Adams was the brewery of the night. Everyone filed in and was greeted with the social beer – Boston Lager, along with a keepsake pint glass. 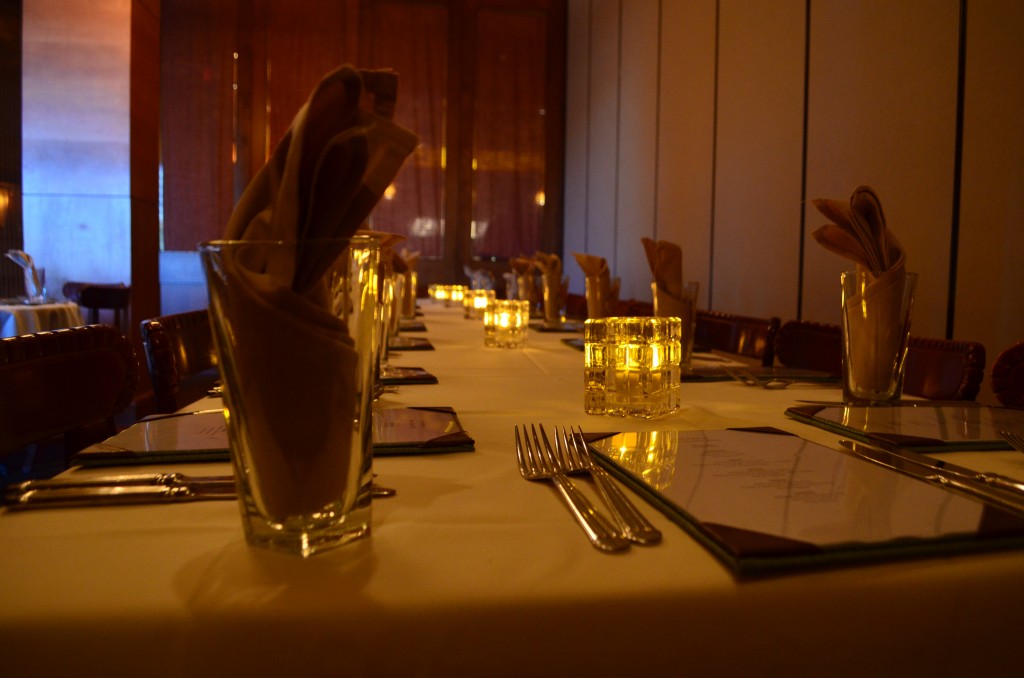 The tables were laid out in a German picnic family-style, forcing everyone to meet new people and share awful and hilarious jokes. 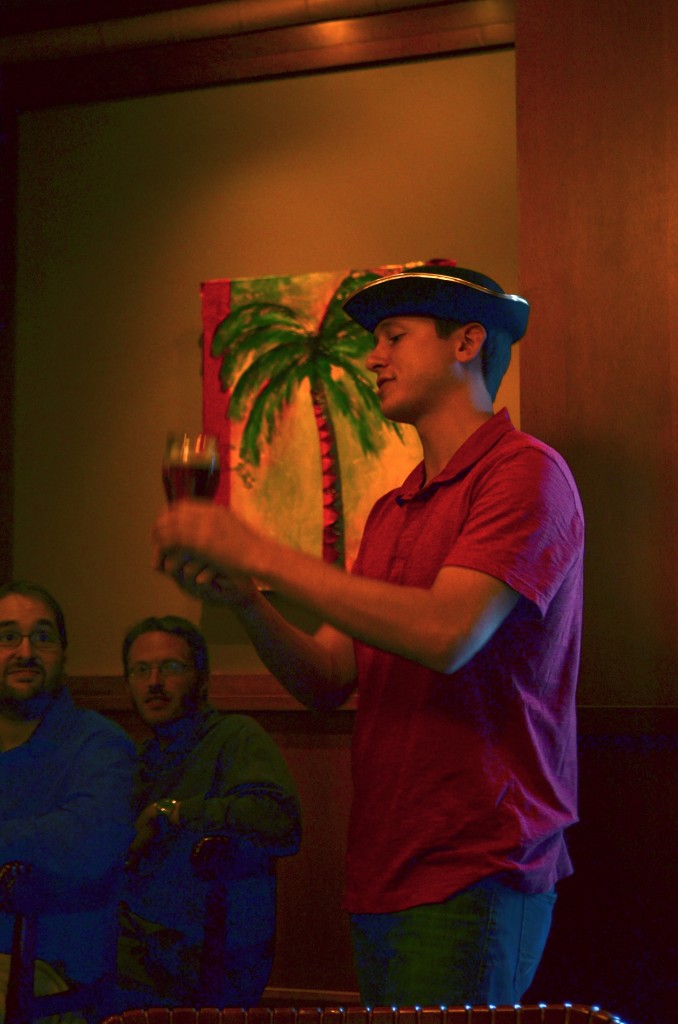 Mike from Samuel Adams was there to give an introduction to the flagship beer and the glass design and how it affects the beer. 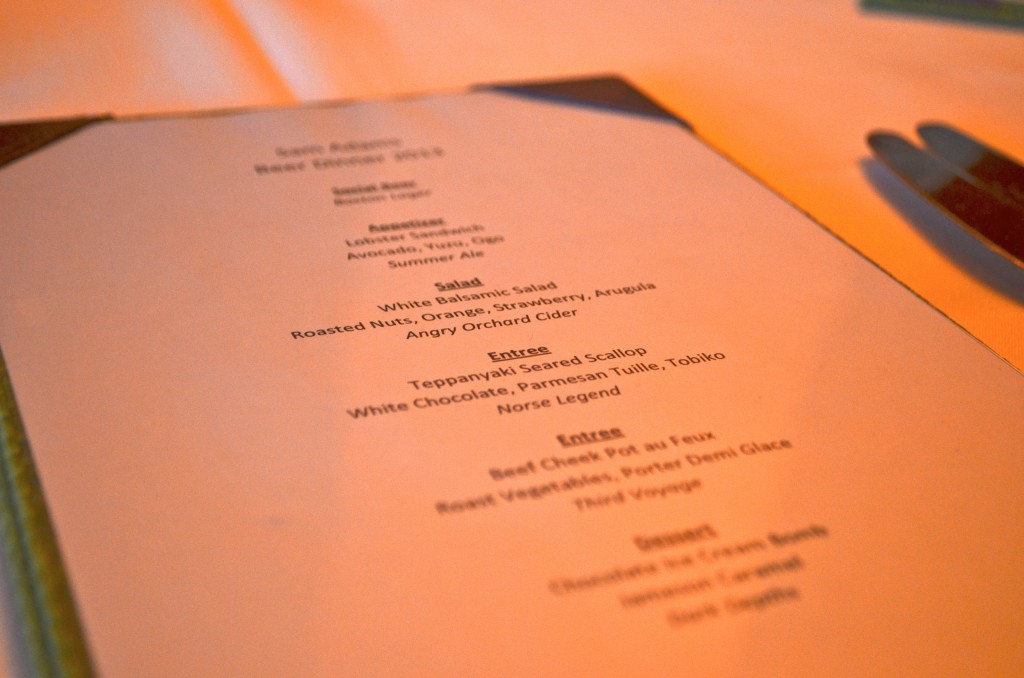 I’d met with Bart, the chef, about a month and a half ago, carrying in a full case of beer and some extra on the side to make sure we got the correct beers paired with the dishes. It was a rough afternoon of research, I tell ya. 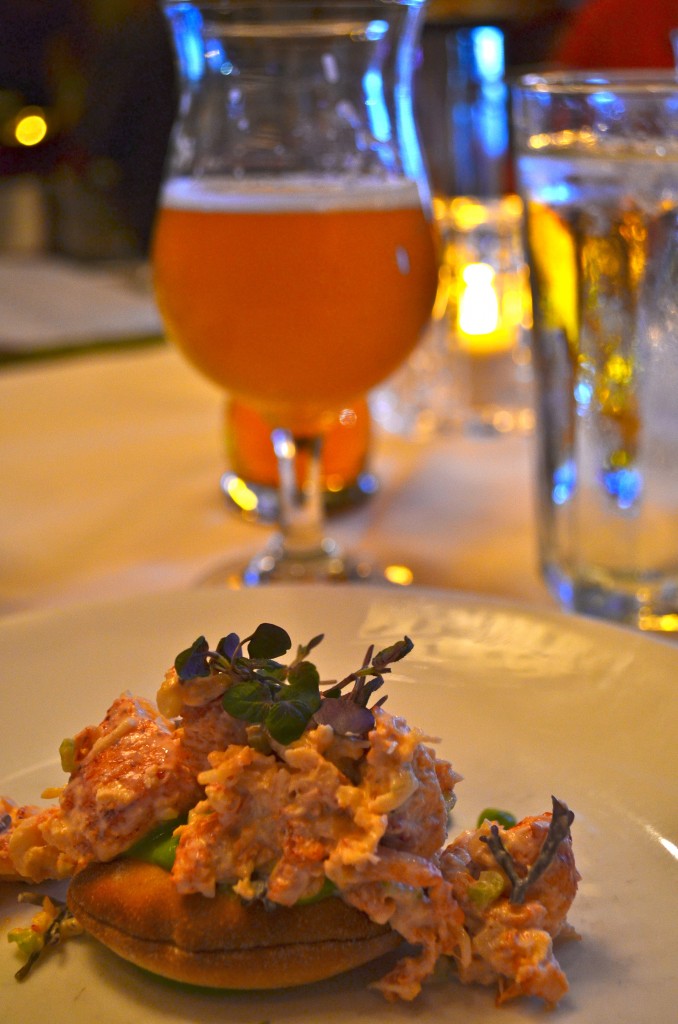 The first dish that came out was the lobster sandwich on a housemade pita bread that was full of peppery lobster bisque and drizzled with avocado creme. We paired this with Samuel Adams Summer Ale – light and citrusy with a hint of coriander and grains of paradise that finishes dry. 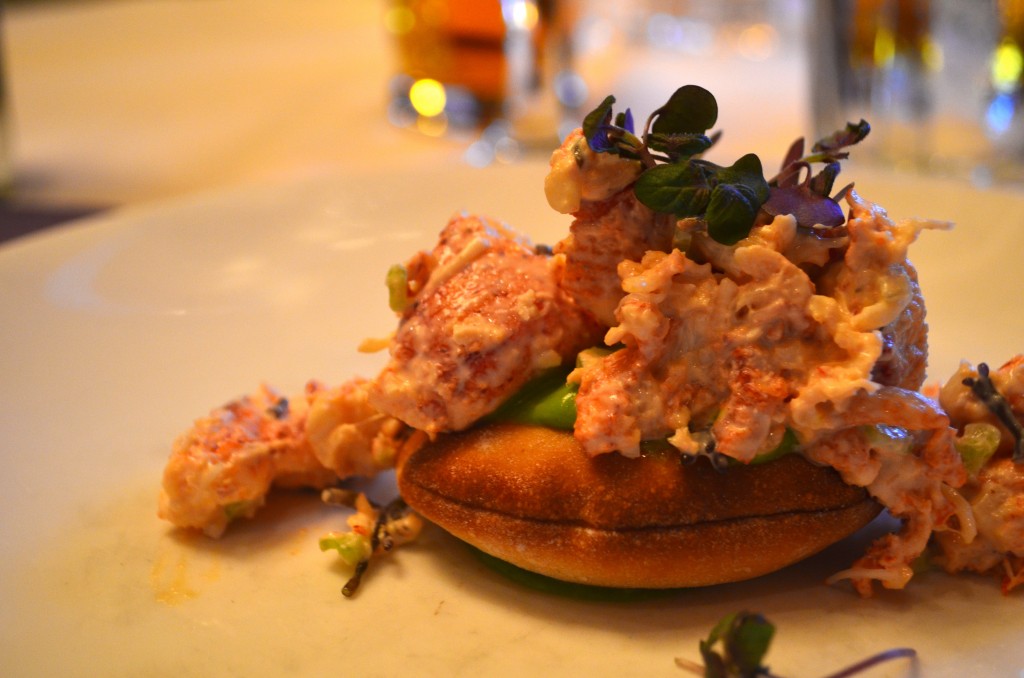 The spices in the beer matched the pepper of the bisque while the citrus enhanced the natural sweetness of the lobster without overwhelming the dish. I demolished this. 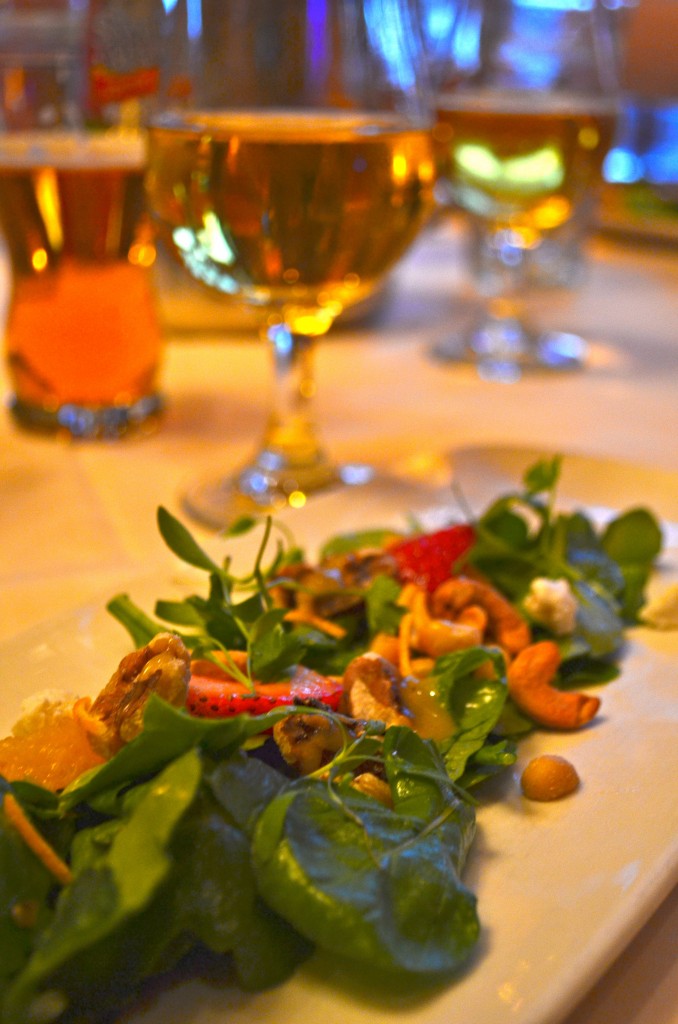 The salad was next – spicy arugula wish goat cheese, strawberries, roasted nuts and drizzled with a citrus vinaigrette that incorporated the pairing beverage – Angry Orchard Crisp Apple Cider. Tangy and sweet, the dressing was absolutely wonderful and showcased the acidity of the cider. (Angry Orchard is made by Boston Beer, for those of you who were unaware.) 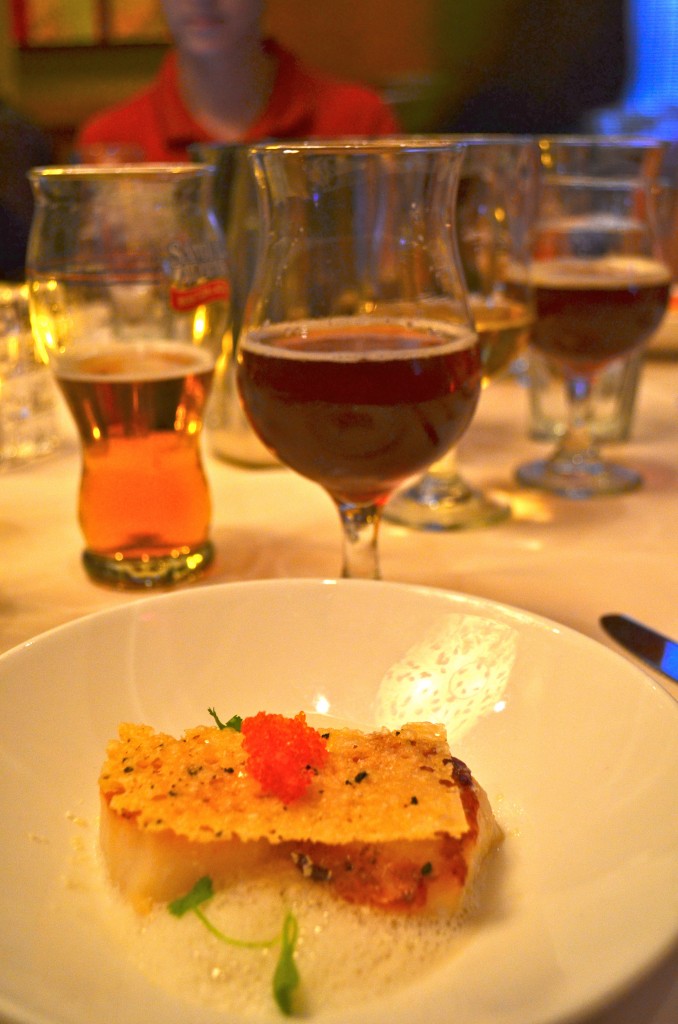 The first entree was something I’d been looking forward to since the first tasting (although I was looking forward to everything after they sent me the menu): Seared scallops with a white chocolate foam and peppered parmesan chip on top paired with Samuel Adams Norse Legend Sahti. 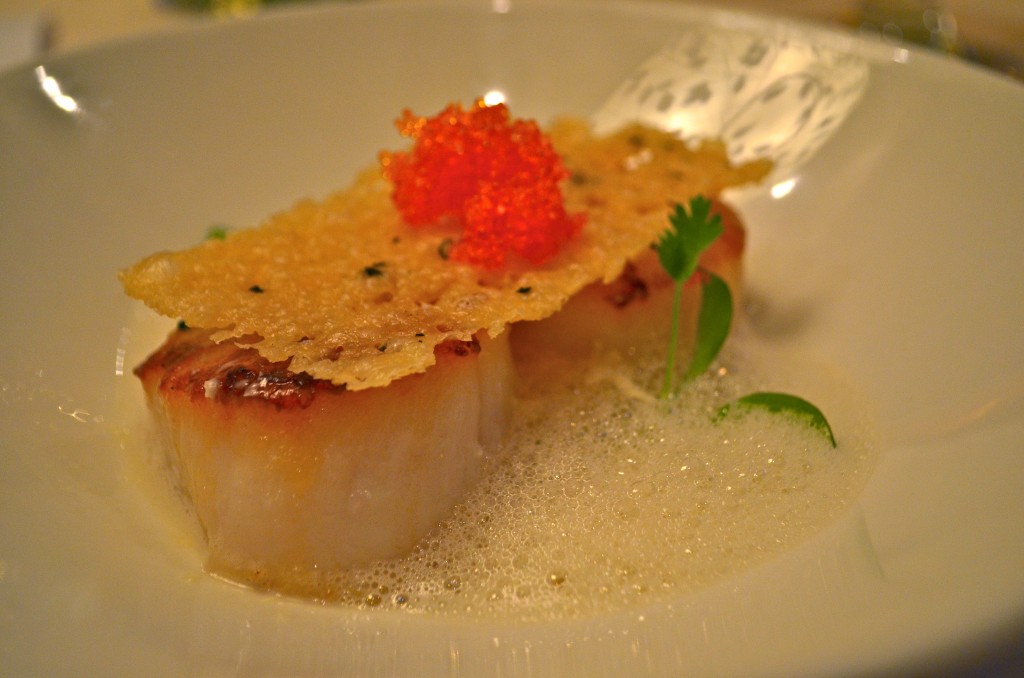 The sweetness of the white chocolate foam was tamed by the earthiness of the beer and pine of the juniper berries. At this point, I was starting to fill up. Only one and a half scallops was consumed, to my chagrin. 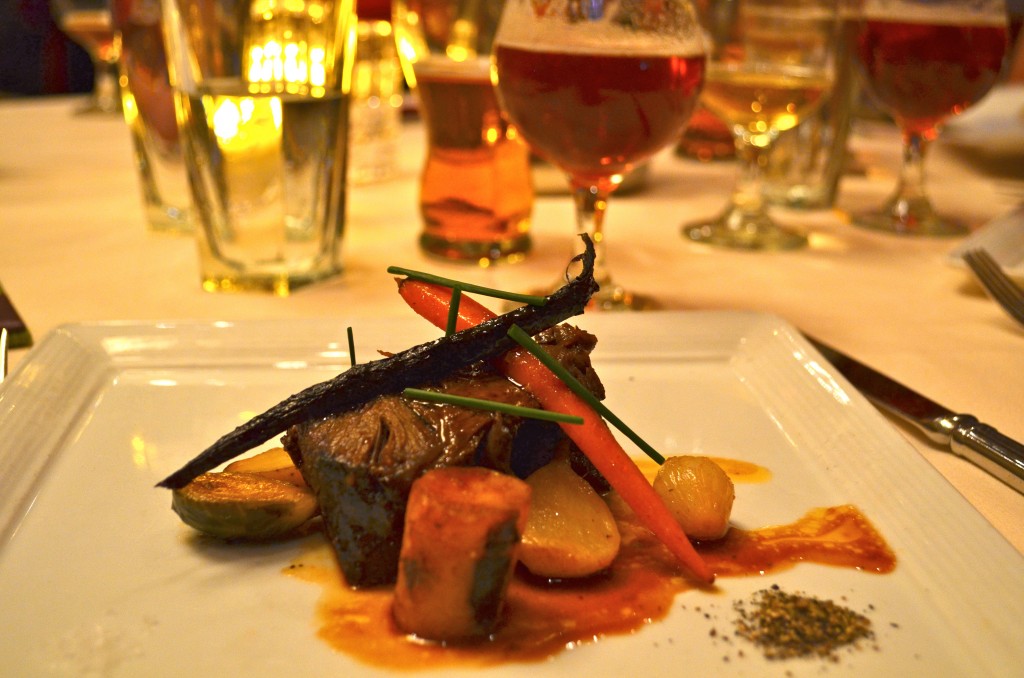 Final entree – Beef cheeks. Face cheeks, not butt cheeks for those of you who are wondering. Bart slow roasted these in a stew for hours, until they were falling apart. No knife needed. 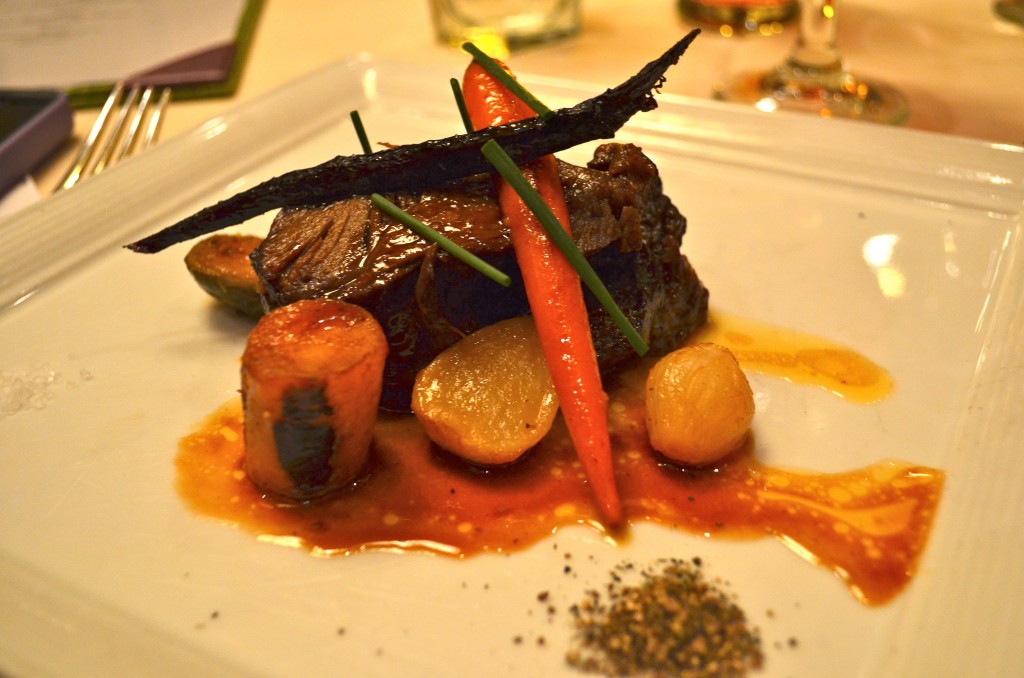 I paired this with the Samuel Adams Third Voyage Imperial IPA – intense hoppiness and carbonation cut right through the rich fattiness of the beef and scrubbed the palate after every sip. I finished more than I probably should have thanks to that pairing… 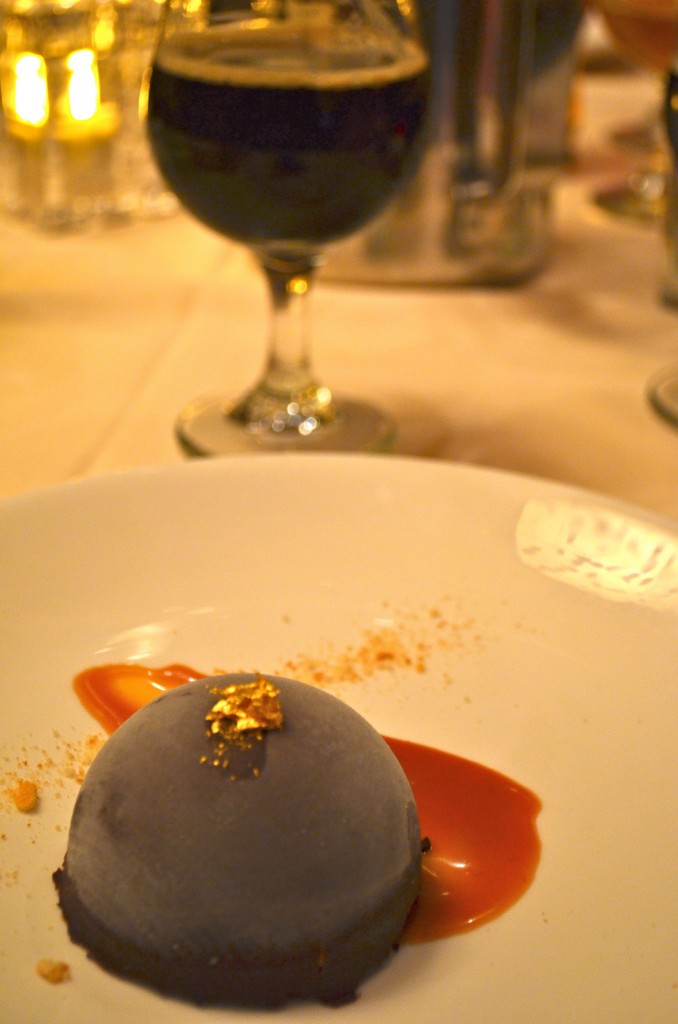 And finally – a chocolate bomb with Jameson caramel and gold leaf paired with Samuel Adams Dark Depths Baltic IPA (which is actually a lager, but labeled as an ale?). 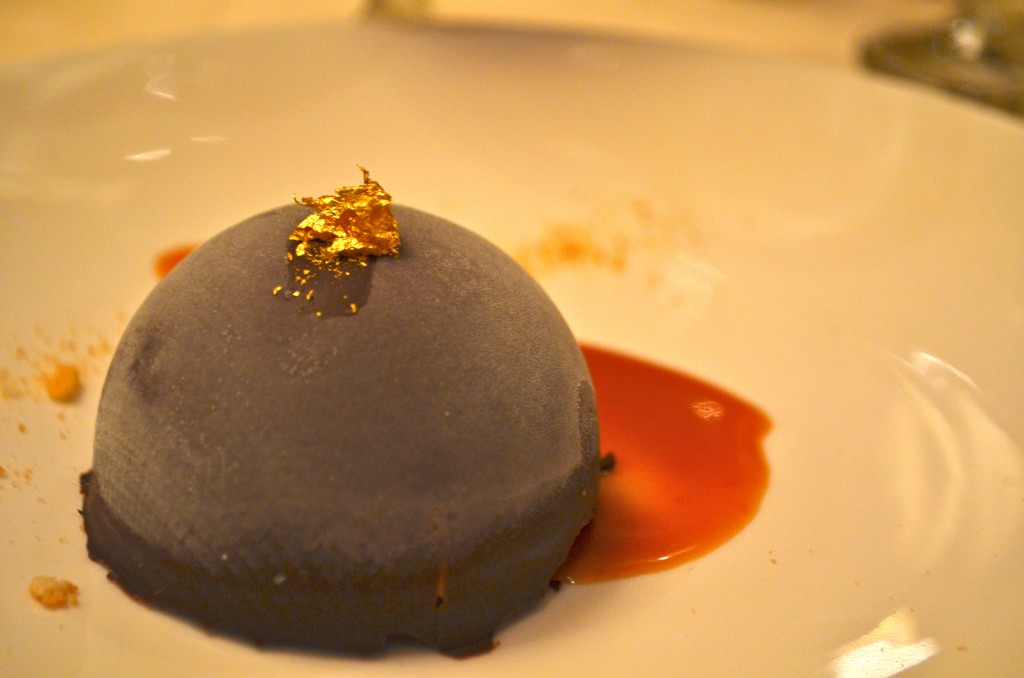 Intense chocolate filled with light and airy marshmallow ice cream. The hints of chocolate in the Dark Depths matched the flavor of the thick shell while the hoppiness evened out the intense sweetness and cleansed the palate. I only had a few bites of this before I had to quit. For shame.

Overall, a very successful dinner! Thanks to Bart and the entire team at Roy’s for their incredible menu!